Abuse or banter? – Sexual harassment and abuse at school

6 out of 10 girls in the UK have been sexually abused at school according to a recent government report. The worst part about this is that most girls don’t realise that what they have experienced counts as abuse and will often shrug it off, putting it down to “banter” or “lad culture”.

Here’s why we need to start recognising the difference between “banter” and sexual abuse or harassment.

The way I dress does not mean you can touch me

An excuse that is often given is “the person was dressing provocatively, they must have wanted the attention”. If someone says this, they are wrong. The way someone dresses does not make them worthy of abuse or unwanted attention.

Throw away comments have a bigger effect than you realise

Words are sometimes more impactful than actions. Calling someone a “slut” or “slag” regardless of their lifestyle or actions, is not right. These negative words can stay with someone and affect them more deeply than you realise.

If someone makes a comment like this to you, you should not be expected to laugh it off or “get over it”. Firstly, you can tell that person directly that making those comments is not OK and that you don’t want to be spoken to like that. Secondly, you should report the abuse to a teacher, parent or anyone in a position of authority. Lastly, if you have any doubt in your mind whether this is or isn’t abuse; it is abuse and no it is not OK.

A common theory is that this stuff happens to everyone and you just have to let it go. The problem with this is that if everyone continues to “let it go” and accept it as “something that happens”, the more it will be allowed to go on.

The fact is, this behaviour is illegal and you will be prosecuted. If you are over the age of 10, the age of accountability in this country, meaning that if you can understand what you are doing, then you will be held responsible. This will leave you with a permanent criminal record.

Ask yourself – if the person reported me for this, what could that mean for me? Could I end with a caution or being charged with an offence? What would this mean for my school career and jobs etc.? What would my friends and family think of me if the details of what I have done came out?

The thing about banter is it’s only funny if you both find it funny. That seems like an obvious thing to say but if you are offended by, or feel uncomfortable with something that someone is saying, then it isn’t banter; it’s effectively bullying. If someone says “don’t be upset, it’s just a bit of banter”, it isn’t banter. Imagine someone doing the same to a close family member of yours… not so funny now is it?

What counts as sexual abuse or harassment?

It’s good to know the differences between harassment and abuse.

Sexual harassment can happen in a professional (workplace or education) or social situation and involves making unwanted sexual advances or obscene remarks.

Sexual abuse is being persuaded or forced into undesired sexual activity.

It’s important to note that this can happen to both males and females; sexual abuse and harassment works both ways. It can also be from someone who is close to you, even if that’s someone you see as a friend at school.

Here are just a few examples of sexual abuse or harassment at school:

Touching, groping or grabbing of intimate areas – if they have not given permission, keep your hands to yourself

Lifting skirts, tops or pulling down trousers – ever “kegged” someone? Pulling down someone’s trousers or pants, lifting their skirt in public, is counted as sexual harassment

Making unwanted sexual advances physically or verbally – This is when the person has not consented (said that they want you to) and you continue to talk to them or act in a sexual way. 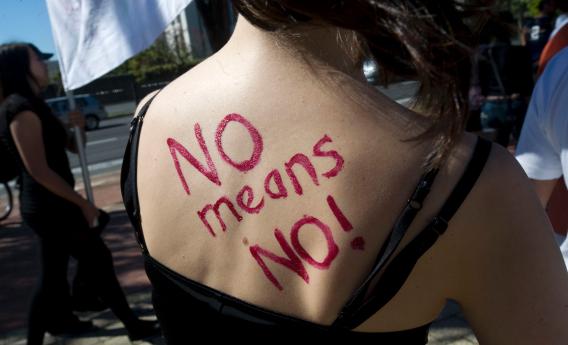 I see it all the time at school but what can I do?

One of the reasons this behaviour is so common and widely accepted is because not many people speak out about or report this stuff. So, here’s what you can do. If you experience or witness this behaviour and feel confident enough to do so, speak up! You can tell the person acting inappropriately that the way they are behaving is wrong or if you don’t want to address the person, report it to someone who can. The more we call these people out, the less it will be allowed to go on!

If you or someone you know has been affected by any of the content in this article, Safeline can support you. You can talk to us over the phone, online or by text. We won’t judge you, we always listen and most importantly we #believeinyou.

Have you been affected by the content in this article?

More Posts
Back to Blog Posts